One of the first things that all newcomers in League of Legends notice is a huge list of champions - over 130 titles (and this number will grow). Some of these champs are free, some can be bought with IP (local experience points gained with every winning game), the others are available only for RP (Riot Points that can be received only for real money). Anyway, it is so hard for a newbie to find the best of the best champions in LoL according to his skill. There are a few guidelines that can be used in this case.

The classes of best League of Legend champions for beginners

All LoL champions are divided in 5 different roles: Top-laner, Jungler, mid-laner, Carry and Support. Totally, there are 134 champions in the game. Some of the champs can perform different roles, others can barely cope with one – the beginner must understand that is pretty hard to achieve the harmony and balance among all playable champs. That is why some of them are more powerful than the others. Especially, when choosing the best beginner League of Legends champions. Most veterans recommend starting with the tanks and junglers but, in facts, you can choose among any classes and roles of champs. There is no such thing as the best League of Legends champions for beginners that may satisfy everyone’s taste and gaming skill. 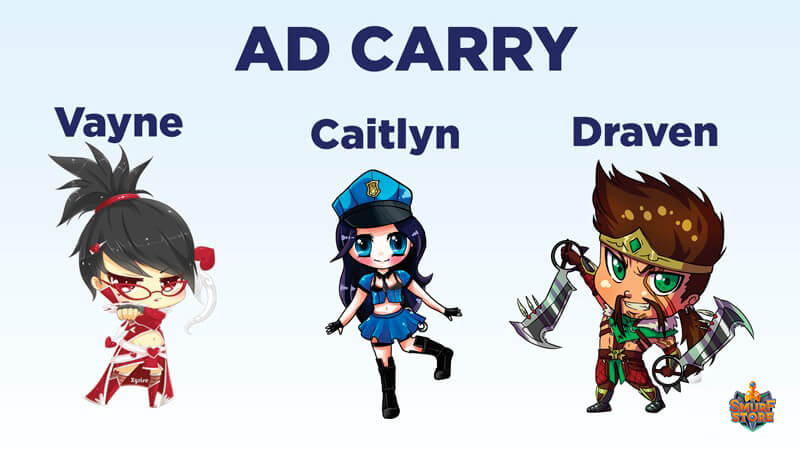 Usually Top-laners are quite comfortable to play. They can stick to the enemy lines there is no one at all and you can safely farm, defending your tower. However, there are drawbacks. The biggest threat to the Top-laner is jungler, who unexpectedly emerges from the jungle and hits the opponent. Carefully check the mini-map and in case of the jungler’s appearance retreat to the towers. 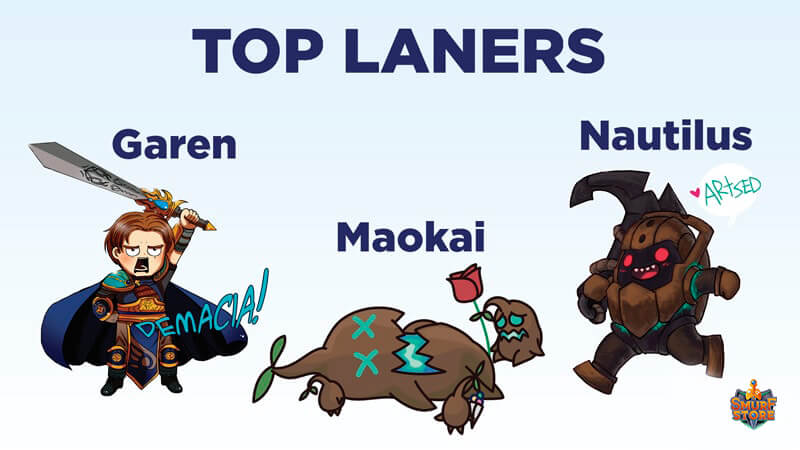 3 most comfortable Top-laners for beginners in LoL

An excellent beginner champ for mass or single murders. Beginners should stay away from Riven, Jayce or Kled. It's really hard to play on top lanes with these champs. 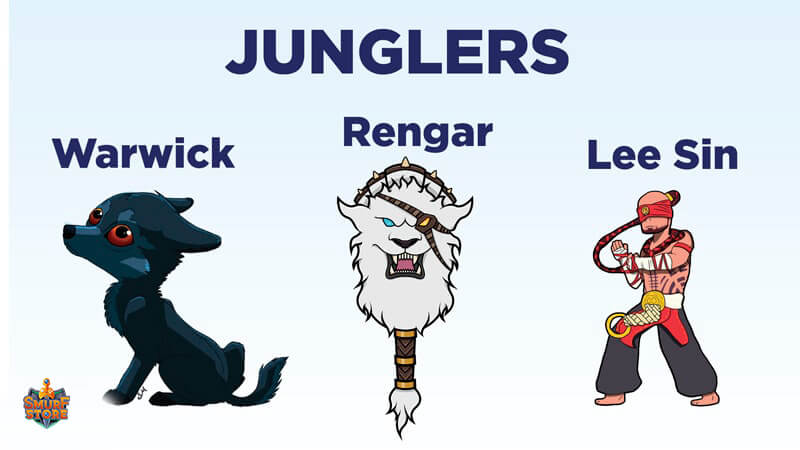 Junglers can perform different roles on the map. The fast farm in the jungle, ambush, installation of wards and traps for enemy champions – all these functions are performed by Junglers. This is a good class for beginners in League of Legends, offering the variability of different gaming strategies. When studying Junglers pay special attention to Rek'Sai, Olaf and Warwick. Their ulta skills are easy to activate, even without any knowledge about the game at all. The damage they may provide is significantly bigger than other Junglers have. The worst Junglers at the start are Lee Sin, Rengar and Kindred. The most uncomfortable champion for beginners in this role is Lee Sin. Never choose him until you learn all nuances of Junglers. 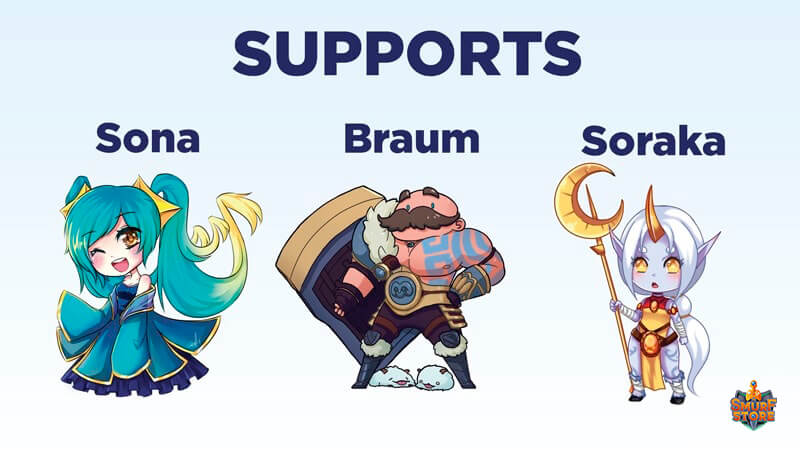 Finding the top champion in League of Legends among Supports

Supports are not recommended for LoL beginners. But you can’t ignore this important class. Everyone who played at least a few matches in League understands its important: without a good Support you just can’t move on. Especially, Supports have a direct impact on the role and contribution of Carry in the battle. Opt for starting your Support career in LoL with Braum, Sona or Soraka. Braum is a top champion in League of Legends with a large shield, able to effectively defend his Carry. Sona and Soraka, in addition to healing talents, also have extraordinary skills for killing enemies. If you are a newcomer consider avoiding such supports as Bard, Tahm Kench, Blitzcrank and Thresh. The game for the Support teaches wards placement, roaming and the most careful combat strategy. You have a unique opportunity to protect your allies and prevent enemies from killing them. It's not so important how many murders you would make or towers would break – without a Support your team can’t function.

How to pick up a mid-lane champion in League of Legends for beginners?

Mid-laners require from LoL players some experience in the game, as they have the maximum influence on the outcome of each battle. That is why they are usually the primary targets for the enemy and are under the constant pressure from teammates. The best champ in League of Legends for beginners who are playing in this role is Annie. She has a magnificent boost for damage and a very simple set of skills. Another pick is Ziggs, capable of farming from killing the enemy champions. The most difficult Mid-laners for beginners in LoL are Azir, Syndra, Zed and LeBlanc. They have rather complicated skills. 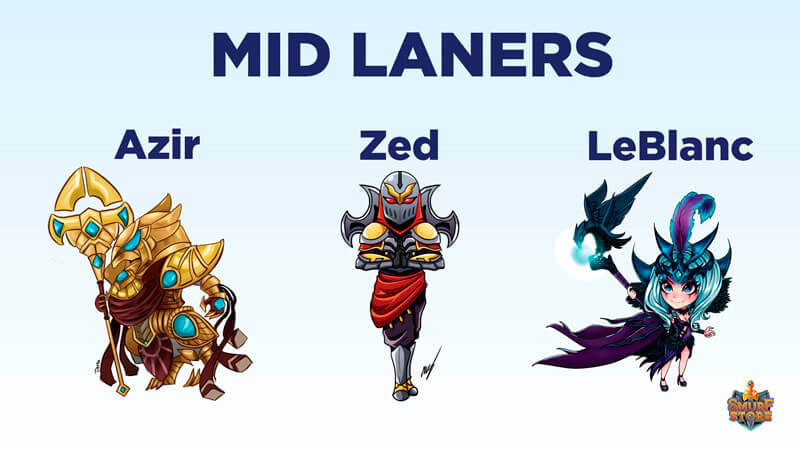 Choosing the best LoL champion for the Carry position

Carry is at some point very common to mid laners. These champs are rather weak at the early stage of the game, and the carry always needs a good support. In this case Carry champs are able to destroy everyone on his or her path and to drag the whole team to the winning score. Most of carry champs can function as the main damager but they do not have a large health reserve. Also Carry highly depends not only on the support, but also on the farm. The League of Legends’ best champions in this class are Caitlyn, Sivir and Miss Fortune. Sivir can farm a lot with boomerang, Miss Fortune has a smart ultra skill, and Caitlyn has the biggest range of auto-attacks. The most difficult champions for beginners in this class are Draven, Vayne and Kalista. Perhaps someday you will become the perfect Draven, but not in the very beginning.

In general, apart the class and position, most newcomers on the LoL dedicated forum define the best League of Legends champions for beginners. Surely, this is not an ultimate list but rather the popularity ratings among new arrived players in LoL:

No matter what are the best League of Legend champions in your personal rating, you can always practice a new champ of the different class. You may use the limited offers from Smurf Store to buy smurf and hand leveled accounts up to the level 30.

2332
Few advice how to make you a better player...
Here are some top tips on how you can instantly become a better player in League of Legends…
Read more
3468
How to play in League of Legends with...
Play with friends on league of legends and enjoy the team spirit with people you know…
Read more
3082
Bits of Advice how to level your account fast
The following guide will be useful for those gamers who are eager to get to the level 30 in the fastest way…
Read more